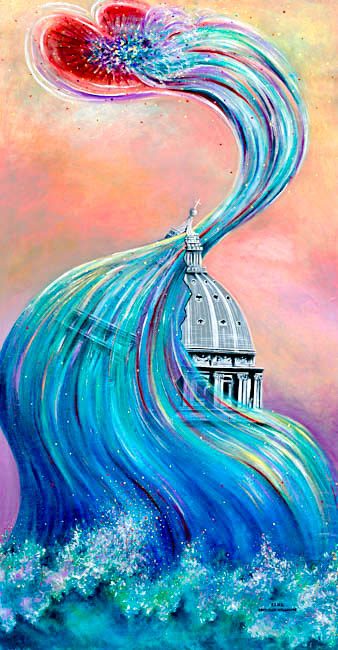 I followed a command from God in 2011to go to Rome (specifically the Vatican) and make prophetic declaration through painting the image He gave me to paint. I was shocked by not only the assignment but also the image.

The Vatican was opened up; God’s heart poured out the River of His cleansing Love through the opened structure. I was to declare these things:

I painted 5 hours on location in Vatican square; then 4 hours in another location while still in Rome. Then it was finished at home in the studio.

It was then carried to Jerusalem to make intercession for Rome’s release.

The following year, 2012, it was carried back to Rome to make declaration again. Once again it went back to Jerusalem for intercession. After a while it came back to Pennsylvania, waiting for further assignment if there is one.