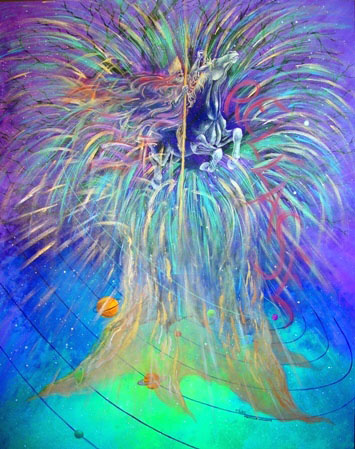 These two trees are not so much literal trees (although they could be so with God) but they are absolutely two different fruit bearing realities, and they feed two opposing kingdoms, ideologies, value systems, mindsets and structures far larger than our own galaxy.
As these thoughts and images were coming together inside me I had a visual/auditory encounter. I heard thunder so great I thought the house I was in would be shaken apart. The thunder spoke three times the word, “RELEASE! RELEASE! RELEASE!”

Then I saw a great white horse with rider plunging with such force as if being ready for 2,000 years. The rider had a long staff in hand (could have been a bow) and a crown on his head. He was an ancient-looking being with flowing robes. With that plunge came the sound of hosts upon hosts of riders. The galloping of horses sounded way off in the distance, but definitely coming forward with great speed and passion as if through a time tunnel.

I heard this sound off and on for four days thereafter. I asked the Lord what I was to do with such an encounter. He indicated I was to journal it. So as I did I discovered He wanted that rider and horse to be plunging out of the Tree of Life. I gasped in surprise.
I observed that this rider was not the one who had written on his thigh ‘KING OF KINGS, LORD OF LORDS’. So I asked the Lord who this rider was. He took me to Rev. 6:1-2 (the beginning of the release of the four horses)…….he was one coming to conquer. I asked, “What are they coming to conquer, Lord?” He took me to Isaiah 13:1-11. There’s much there but here are some excerpts…

“……I have summoned my warriors….listen, a noise on the mountains, like that of a great multitude…..I will put an end to the arrogance of the haughty and will humble the pride of the ruthless……”
I repented instantly with the overwhelming sense of the fear of God on me. “Lord, I have arrogance in my own heart. What will save me from this reckoning force?”

He gave me Isaiah 61:1-3 (eventually the painting called THE BRIDE’S RELEASE). He said it would be the key of humility and the garland of praise…”HUMBLE WORSHIP will free you from my retribution”.Many people see many different words in this painting beyond the word intentionally painted, RELEASE.