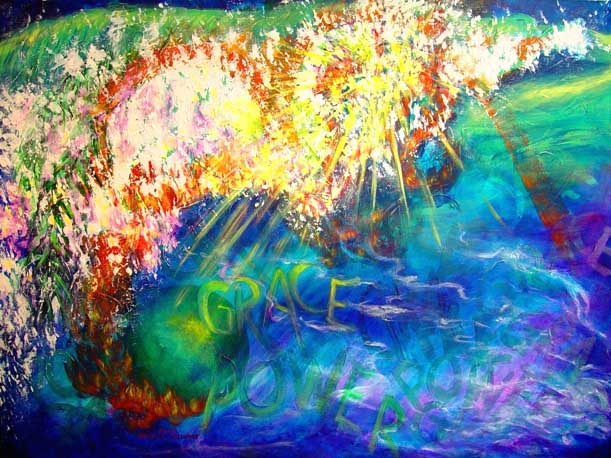 I had to have two intercessors, who were finishing a 40-day fast, onsite to help me birth this painting as quickly as possible as God wanted it done by the date 7/7/07. He wanted it to make proclamation at a football stadium in Dover, DE where prophetic people gathered for prayer and proclamation.

This is the most abstract image delivered thus far. Because of its abstractness we discovered that there is a powerful revelation also when it is turned up-side-down. Imagine that! God was imparting a multi-directional revelation!

In Exodus 5 when deliverance of God’s people began with Moses and Aaron showing up on the scene, the bondage pressure got horribly worse. Moses goes to God as he comes under pressure from the people.

In Exodus 6: 2-8 God re-iterates the vision and declares,“….I will redeem you with an outstretched arm and with mighty acts of judgment…” We cry out for justice day and night. So much of our culture rests on injustices of all kinds. Our Deliverer comes with a mighty arm like the mighty waters of a tsunami wave. The pressure to fall back and under, to let go and drown is so great.

God calls to the faithful, “JUSTICE COMES. HOLD FAST! Hold fast to my sustaining grace power. Extend my extravagant grace to others and yourself. Hold on to my grace. Nothing can withstand my power except my grace.”

There are three palm branches. Palms symbolize royalty and victory. God and those who fix in Him will wave these victoriously.

There is a message in this image from Daniel 7: 9-10 “thrones were set in place, and the Ancient of Days took His seat. His clothing was white like wool. His throne was flaming with fire, and its wheels were all ablaze. A river of fire was flowing, coming out from before Him. Thousands and thousands attended Him; ten thousand times ten thousand stood before Him. The court was seated, and the books were opened.”
JUSTICE COMES. HOLD FAST!