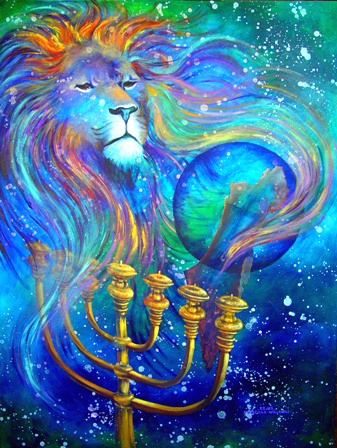 This painting describes the longing of Father God’s heart. He has been longing for the restoration of His creation since the Fall. Pictured here is the country of Israel standing out from the sphere. If you look closely you will see the Sea of Galilee and the Dead Sea. Father’s mane touches Jerusalem as if He is holding an appointment there for His Son’s return.

The menorah I call the “Menorah of Promise”, because it is in the same design as the one I saw in Jerusalem waiting to be placed when the new temple is built. As the Jews long for the new temple and God’s dwelling there, so God longs for His people to receive His plan of salvation….the gift He has already given in Yeshua the Messiah. Israel remains in the shadow of the cross.