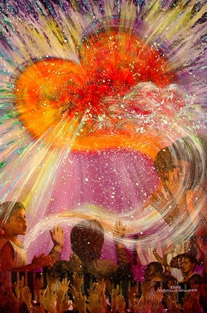 I was on my way to another painting that I thought He was asking for release……another painting I held for 2 years to release. I was confused on which canvas it was to be on. For an unknown reason I could not tell if this was to be on a smaller canvas or the larger one. Every time I advanced to one or the other it seemed there was a bit of confusion. A cherished sister and brother came to the studio to pray over the canvases. Both were anointed and prayed for.

The Sunday morning at the Strasburg Assembly of God before leaving for my 5 days of solitude in a cabin nearby, I saw some monthly church magazines as I was worshiping, laid out on the back of the sanctuary table. I followed the urge to leaf through them. There were images that seemed would make good references for the painting. So I took them along. Little did I know that Father God was just making sure I had what I needed to follow Him where I did not know I was going.

I set up for my painting time in this cabin. Just as I approached the canvas to once again try to discern which canvas it was going to be I heard Him say within, “Take the smaller one. I am giving you a painting before the one you thought you were going to deliver. This time I am not going to show you ahead of time what it is. You must explore with me and find the painting as you paint.” This is like painting blindfolded. I had never done that like this with Him before. I have painted many times not knowing what I was painting but not under specific orders with so many unknowns. Besides that He was requiring me to paint with new paints…..liquid acrylic. The problem with new media is that you don’t know without experience where the boundaries are. One does not know when they will turn to “mud” and be ugly.

The unfolding had a touch of excitement to it, until the interaction inside the heart shape was staying ugly too long. I always tell my apprentices that a painting must be allowed to get ugly before it gets beautiful. It is what imparts freedom into it. But, again, the “ugly stage” was taking a long time. Not knowing where I was going in the painting made it seem like I was lost and the painting was about to be ruined. I cried out to Him, “I don’t know what I am doing! I am going to ruin it!”

Then I heard Him address me, “Are you free to ruin a painting? “ To which I replied, “Not so much.” He then said, “EXPLORE WITH ME. Let me take it where I want it to go. Rest and enjoy the journey. Don’t be concerned about what it looks like, just let me lead and let me take full responsibility for it.”

This after all was part of the very message of the painting.

God honors all sincere worship in His name and He is near to the brokenhearted when they cry out in worshipful respect and pleas. Yet, there is something that makes His heart POP and TOTALLY SPILL OUT, when one worships with the heart of a child…….self abandoned wonder, awe and full delight.

Yes, that is the worship that “spills God over”! It kind of looks like Pentecost when we are in that place.
Worship is meant to focus not on our delight but FATHER / SON / HOLY SPIRIT DELIGHT. The title focuses on the Father person of the trinity because we are emphasizing the child-likeness.